"And a Little Child Shall Lead Them ..." 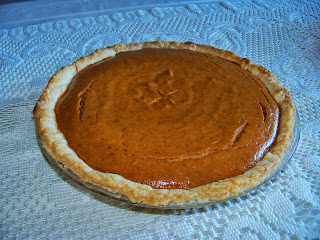 There's something wholesome about the process of making a pie.  Something Norman Rockwell-ish.  The simplicity of the crust -- just lard, flour and a bit of liquid -- the delicious filling, the pungent aroma while it's baking.

And every time I make a pie, I think about my daughter, Jen.

She was just nine years old when she marched home from Girl Guides one day and announced that she intended to make a pie to earn her baking badge and she needed my help.  My shoulders slumped.

A pie, I thought dejectedly.  Why a pie?  How could I tell her I was lousy at making pastry?  In fact, I didn't have a clue.  As a young wife, eager to impress my husband, I baked him a pie that he later, with gentle affection, referred to as a hockey puck.  My pastry skills were nil.  I was a spectacular failure at pies.  He told me to stick to cookies.

My sister-in-law was a pastry expert.  Her pies were heavenly.  Her crusts were flaky and tender.  She told me it was the simplest thing in the world to make.  I hung my head.  I couldn't do it right.

"You're on your own, Jen," I finally blurted out.  "I have no idea how to make decent pastry."

Jen was unfazed.  She always did love a challenge.  I learned early on to never tell her something  can't be done.  She would often parrot her dad's line, "If they can put a man on the moon, they can (you fill in the blank)..."

So out came the Crisco and the flour.  Her little hands flew into the bowl.  She barely touched the pastry mixture before rolling it expertly, plopping it in the pie pan, adding the filling, and adjusting the top crust.

"See Mom?  It's simple.  Just don't handle it much," she said with Martha Stewart confidence.

And you know what?  It was the most delicious pie we had ever eaten.  Her dad beamed.  Jen grinned.  I was amazed.

Today, my pie making skills have vastly improved.  Every time I roll out the pastry I hear her voice.  That little voice.

This such a precious memory. I love your daughter can do attitude. Diane G

Jean Mottashed writes about the little moments often glimpsed in family life, and finding the joy in the ordinary.